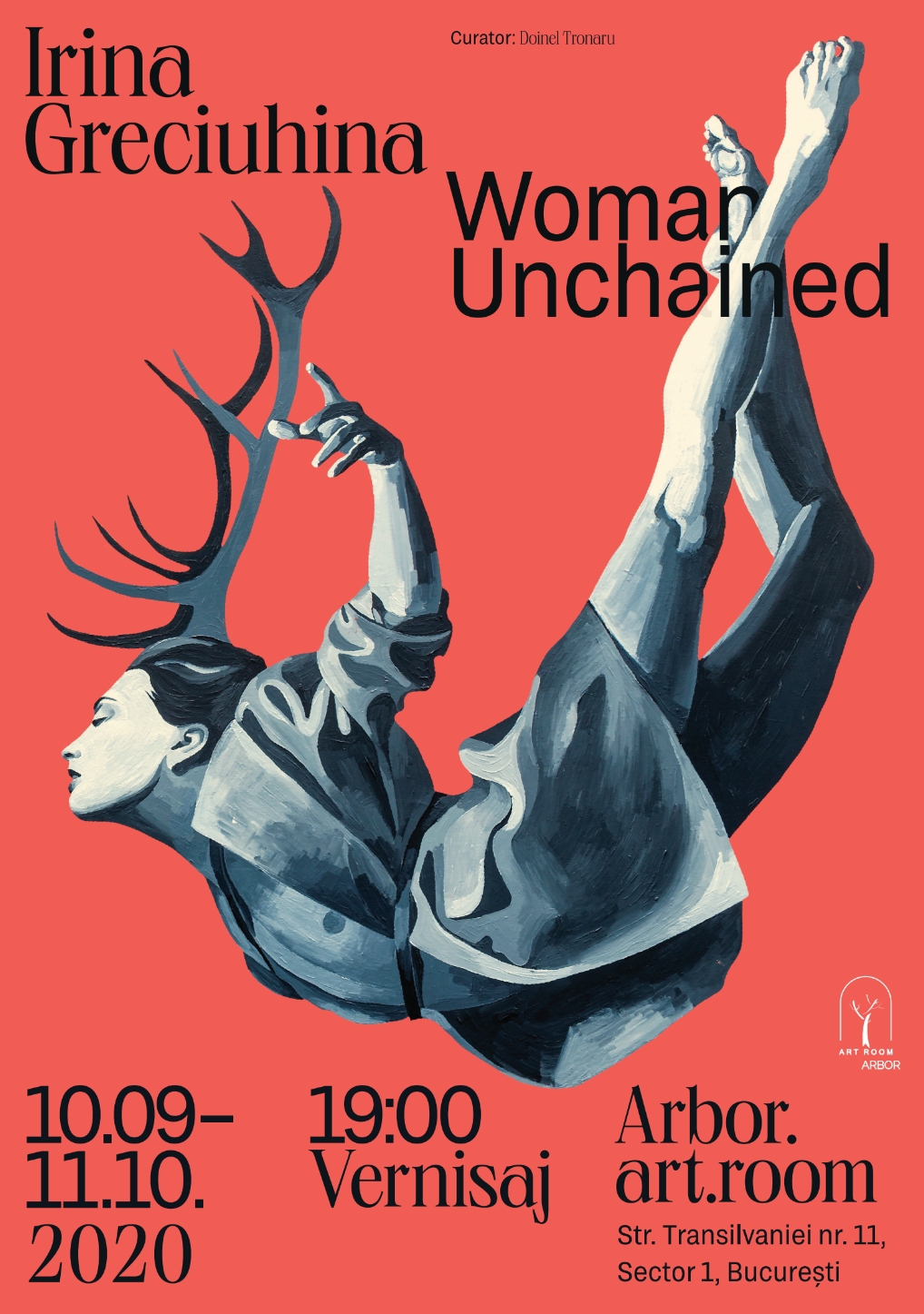 Arbor.art.room is pleased to present “Woman Unchained” a first personal exhibition of Moldovan artist Irina Greciuhina in Bucharest. The exhibition is curated by Doinel Tronaru.

Irina Greciuhina (b. 1982) is a Moldovan artist based in Chisinau. In her artistic practice she is interested in “study of female archetypes”, perceiving women as “a unique, divine and natural phenomenon”. Her paintings were exhibited, among others, in Venice, where she made a real splash, but now, for the first time, she exhibits her works in Romania presenting her solo show in the exhibition space Arbor.art.room (str. Transilvaniei, no. 11, sector 1, Bucharest ) in September.

There are two important and unique details of this exhibition:

First of all, the attempt to integrate artists from the Republic of Moldova in the Romanian cultural space, building a strong dialogue among the Moldovan-Romanian communities. It is the main objective of the Arbor association for culture and arts led by Moldovan Maecenas and art collector Victoria Nagy Vajda.

Themes and means of artistic expression do not belong to any nation, they are universal. Irina says about her art: “I am deliberately trying to destroy stereotypes about our local artists, showing that Moldovan art not necessarily has to deal with national motifs, images of the Moldovan village, traditional ornament or nostalgia for Soviet times. My works primarily represent my reflection and my vision of the whole world”.

Secondly, an impressive aspect in Irina’s artworks is the predilection for female situations and motives captured in the most diverse and dreamy poses. Of course, the artist’s approach is well integrated into the broader paradigm of 21st century feminism (the “second sex” conquest of all power, including political and cultural). However, Greciuhina rejects any “group” or ideological “props” that she finds unnecessary for her art. “Women are situated at the center of my compositions and at the heart of my personal world. But I don’t want my works to be seen only through the prism of feminism, they don’t belong to certain frames and patterns”, says the artist. In other words, “de la musique (l’art) avanttoute chose”, as Verlaine’s “poetic art” suggested.

“Woman in chains” is a line from the ‘80s song by the band Tears for Fears, it is so distant from us both politically and ideologically now. “Woman Unchained” is the title of Irina Greciuhina’s solo show in Bucharest. It is stipulated also by Tarantino’s “Django Unchained” – by which the American director did nothing but update the Shelleyan saying (“Prometheus Unbound”). There are so many references relevant to this topic: the “victory (emancipation) of the slave”, the “(Freudian) return of the repressed”, or “woman is the nigger of the world”, as Lennon had brilliantly said.

However, in her works Irina did not choose a violent pro-feminist approach (“SCUM Manifesto”, manifesto of penis cutting, by Valeria Solanas). Her “unleashing” is in fact an explosion of vitality and femininity, a celebration of the joy of living. It is a hymn to the beauty of life, similar to the one at the end of the film “Les nuits fauves” (1992) by the French Cyril Collard. Her women are independent and free, each telling her own story.